Gear: Ice axe (used briefly), helmet (should always have for the gully)

Our group consisted of a boat-load of lady awesomeness: myself, Andrea, Claire, Leslie, Miyabi and JFro. Sorry JFro, since this was initially meant to be a lady trip, you too will have to exist in this story as a lady.

I somehow got roped into being the trip leader for this outing. Probably because I was the only one from the group who had been to Hurricane Peak before. When I last frequented this gem, Phil, Seth and I camped at Boulder Lake, caught fat trout, stuffed our faces with fall-time huckleberries and took a nice jaunt to the top of Hurricane. It was all pleasant and mellow. I say mellow, because this was 7 years ago and we were beastly bad-asses back then, regularly conquering Cascade peaks rather than dinners for a family of four. So, my initial description of the destination was probably not super accurate, as I was thinking about it in terms of my mid-twenties, cocky, I'm-a-mountain-warrior memory.

The trail to the lake is steep, but straight-forward. Don't forget to stop and check out the amaze-balls cascading creek that keeps you company for the entire duration of the trail, especially if you're hiking with JFro and you're either running to keep up with her Sasquatch legs or being distracted by her other-worldly stories. The lake was still mostly covered in snow, which is too bad because I really wanted to don my Hawaiian bathing suit shorts and jump in. Sorry Hawaiian shorts, your time will come for alpine dips. At the lake we met four SACsters and all of a sudden it was a party (a socially distanced one of course). I hadn't been around this many SAC people since March, which made me dizzy and giddy and forgetful of social etiquette, which is nothing new I guess.

From the lake we could clearly see the tallus slope on the other side, which connected to the ever-popular gully. I knew we had to end up there by staying high, though I couldn't remember the exact route around the lake. Never-mind that Phil told me to take the ridge (who listens to their husband?). Also, never-mind that Chris Danielson told us to do the same thing (who listens to Chris Danielson?). So, we started up the ridge, but didn't exactly stay on the ridge and ended up traversing steep, heather slopes instead. Oops. Apparently JFro's injured ankle didn't like this. And apparently others in the group didn't like this either. The lessons? 1) Always listen to your spouse. No, make that SOMETIMES listen to your spouse. 2) Always/sometimes listen to Chris Danielson.

But don't fret reader! The emotional trauma of shitty, steep, heathery bull-crap didn't stop this group! JFro chilled out to protect his ankle from more abuse, while the rest of us braved the rock slope, into the steep gully, doing a slinky dance upward so we don't kick loose rocks on each other and damage our gorgeous lady heads. The path is steep, but is less daunting than it looks from across the lake. The heat was the biggest challenge. From the pass we headed left, through a small patch of snow and up a semi-trail to the top. We were victorious! And while we were basking in our lady glory for having been the first ones to tick this Skagit60 peak off the list, Miyabi read the summit registry and announced that TRAVIS GOMEZ actually summitted the day before. WTF Travis?! Aren't you like a new dad or something? Just kidding, we're all really happy for your summer mountain accomplishments. Keep up the good work.

Down, down, down in the heat we went, reconnected with JFro, took the ridge back (because we learn from our mistakes like good mountaineers) and said goodbye to this gorgeous place. Miyabi took a dip in a little pond below the lake and I put on my Hawaiian shorts to pretend like I was going to take a dip. The day was longer than anyone expected, but you can never go wrong being in the Cascades and in the company of great ladies (again, this includes JFro). 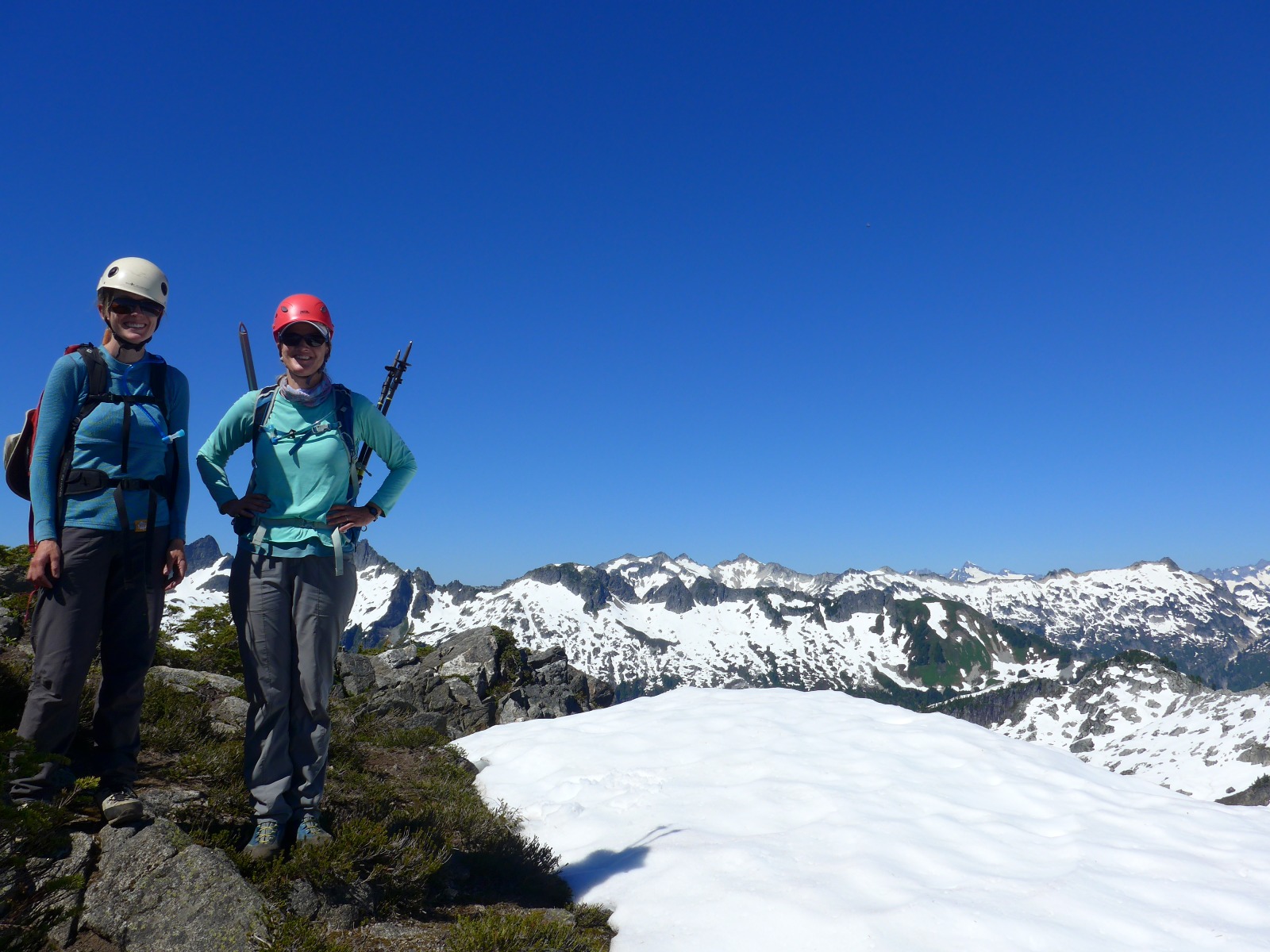 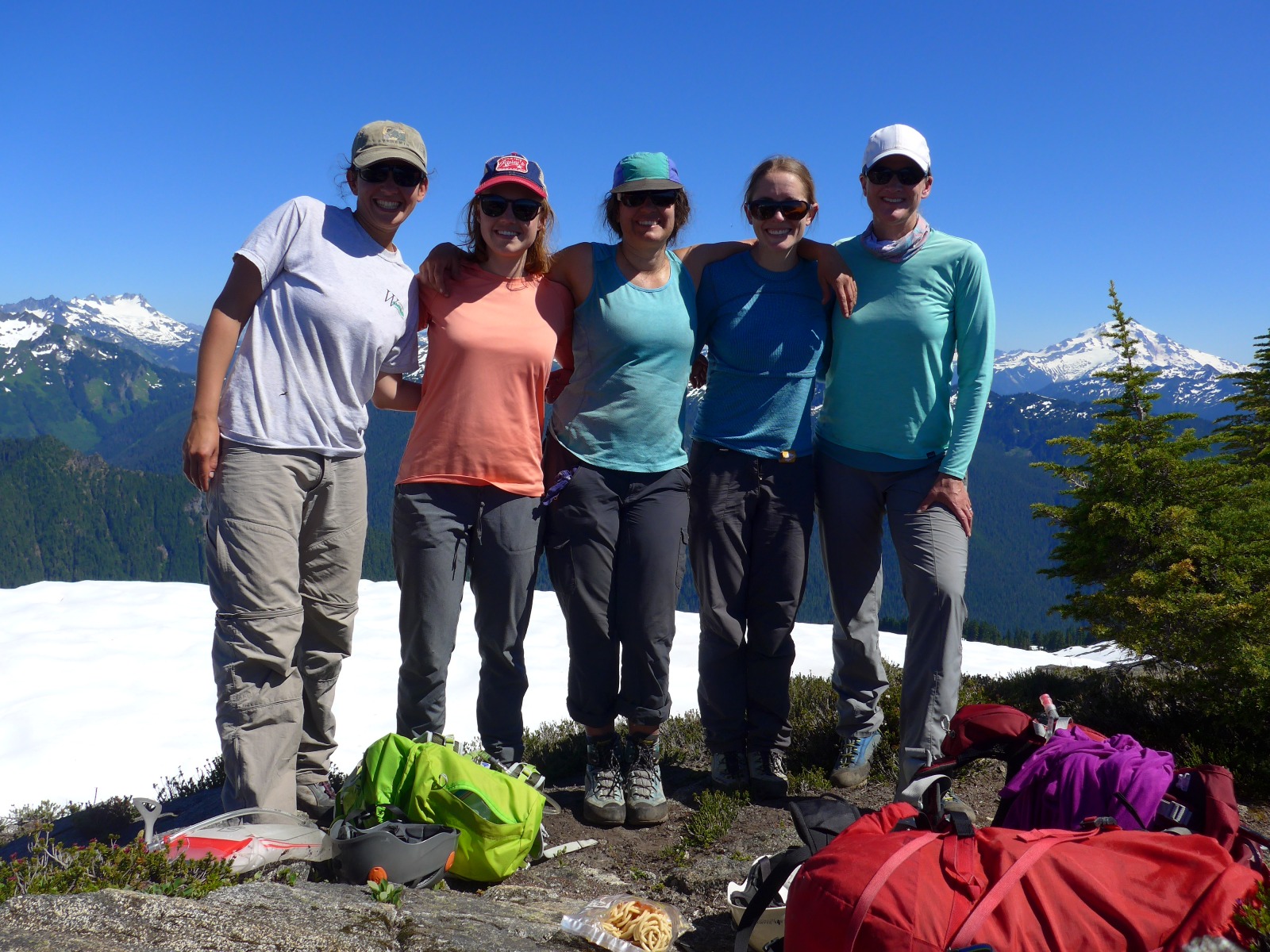 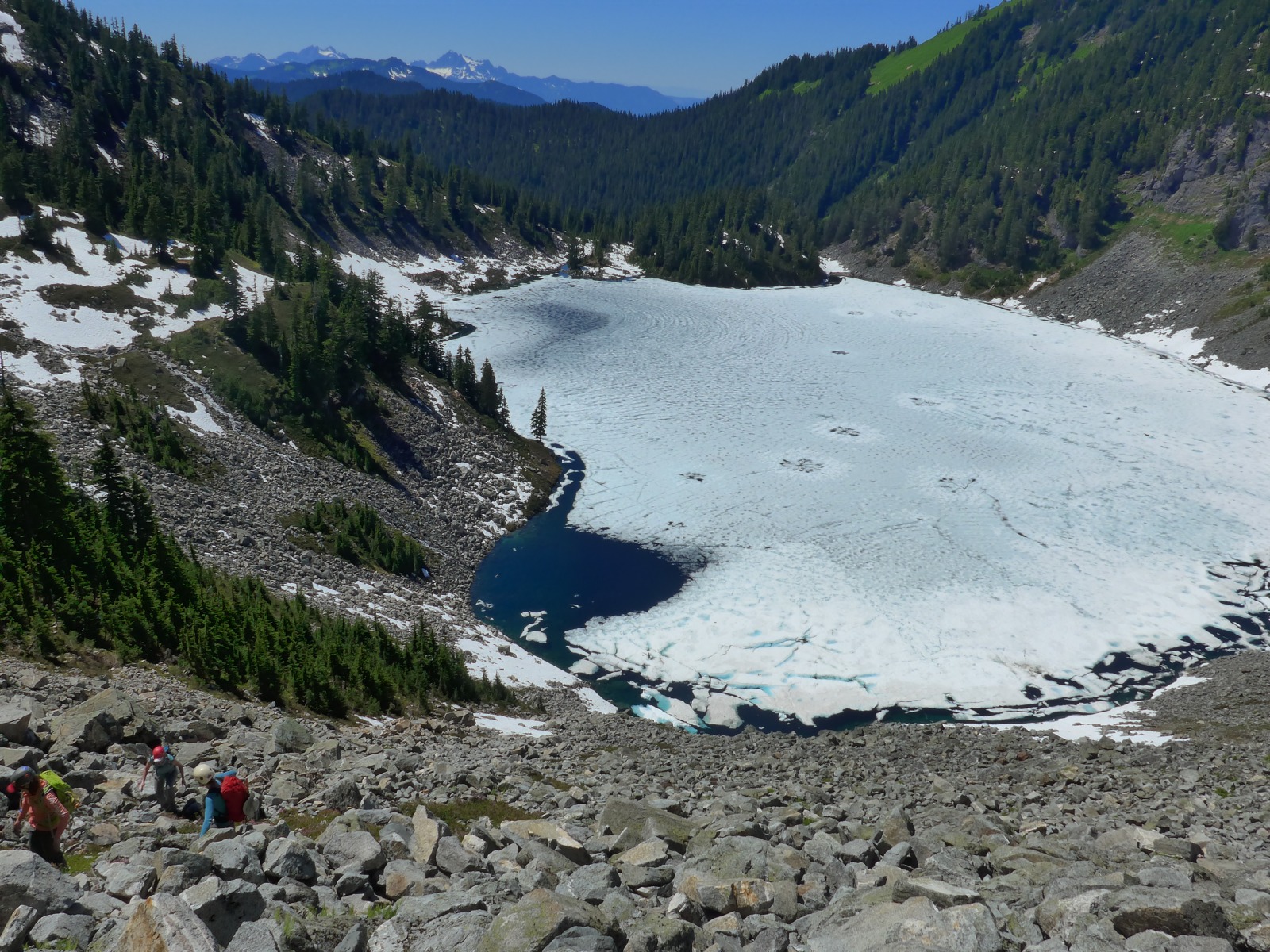 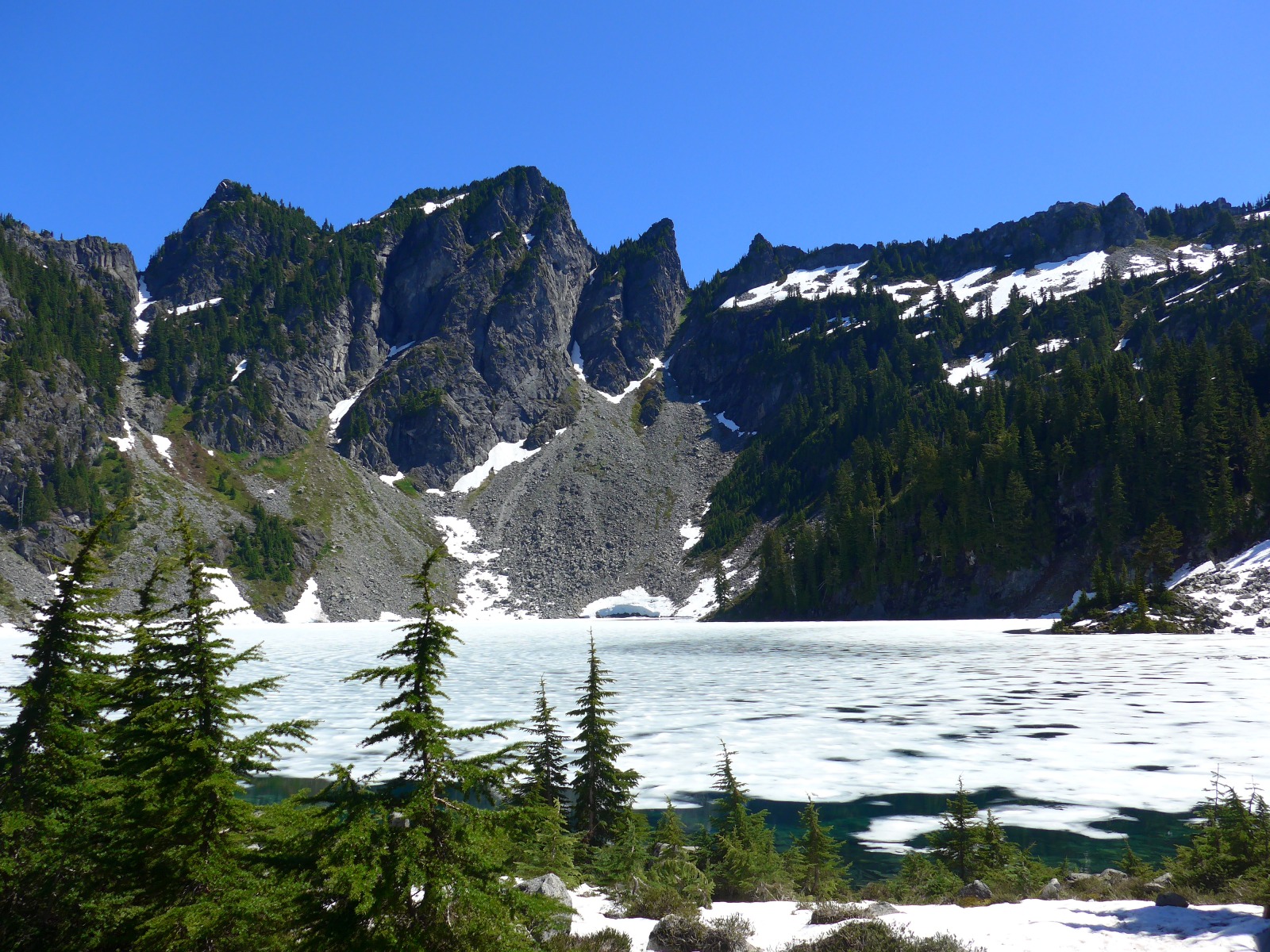 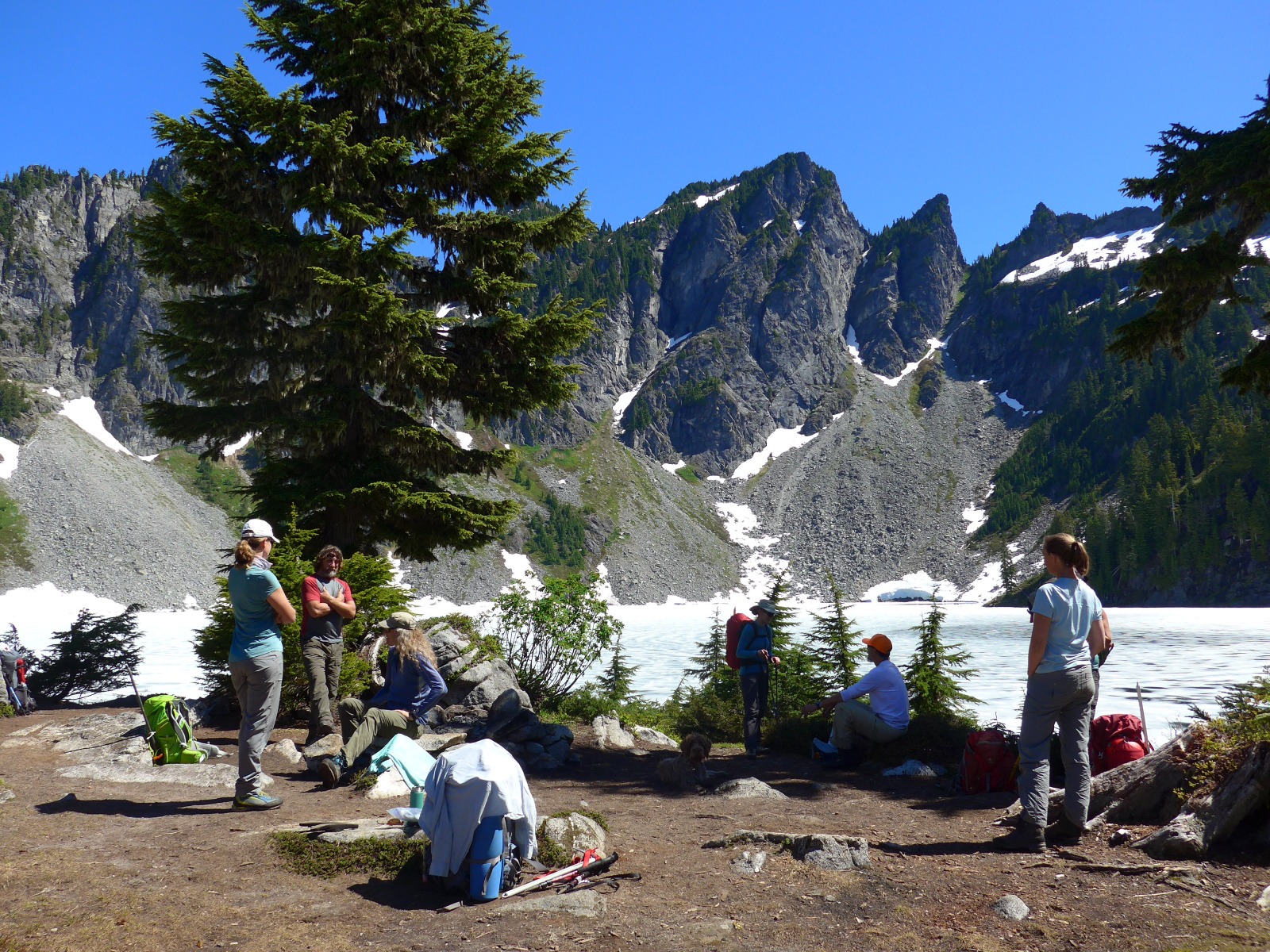 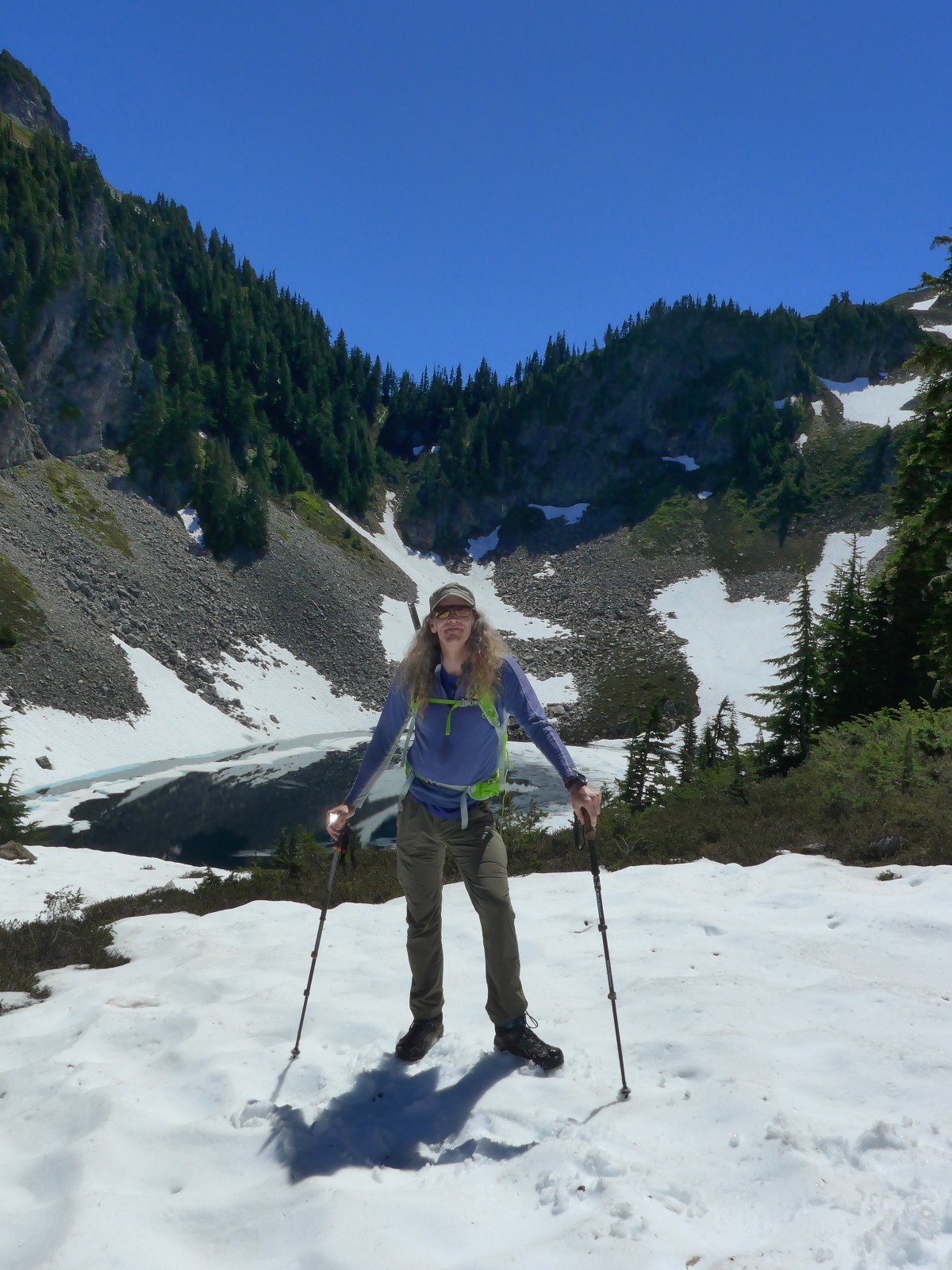