Rolled out of bed at 0100 and picked up Don @ 2:00 am. It was early, and somewhere around 6:00 I started remembering details of our trip again! It appeared that we had taken the Scott Paul trail to the tree line, switched to ski boots, and started walking crusty snow towards the squak glacier. We were making good time walking so we delayed putting on our skis until the base of the glacier.

Skis went on, harness went on, and a wind layer went on. It was right around 8:00am and i was starting to think it *might* not be a sunny July - bluebird day. We skinned up the glacier with no real difficulties, meeting a few other ski parties along the way. The route finding was easy, crevasses were visible and partially open, but everything was easily navigated and not worth roping up for.

Around 9,000 ft Don reported to me that the air was becoming thinner, and a little too thin for his liking. So we pulled the pace back, departing from 1,000 ft/hr and throttling back to something a bit more comfortable for him. At this point the wind was still increasing, and the air temperature was now below freezing, that means we skinned along on firm snow with ice crust on top. All other parties were now wearing ski crampons, but we skinned along using skill(z) rather than depending on those silly SKI CRAMPONS.

Conditions were worsening and large crevasse were open on the fall line just 100' below us... so on the traverse over to the crater, we stopped skinning and used our BOOT CRAMPONS (and a rope) to safely and securely get to the crater. We ditched the skis at the crater, and booted it to the summit, we arrived around 1:00pm, it was cold and windy there too.

It was cold and windy enough where Don experienced an eye injury from a flying ice chip, he was all teared up about it the rest of the day! I had lack of comfort on the windward part on my body in the crotchal region, i was already wearing all my layers so i applied a boot warmer between layers. It provided only partial comfort.

Walking down the Roman wall was slow, once we arrived back at our skis things sped up. We packed away the rope, ripped our skins, and it was only a few turns and we were out of the wind and back into the sun. We enjoyed corn snow and good skiing from 9000-to-7000 feet then things got a bit warmer but the snow was still fast. A few noteable happenings, we unknowingly skied over a snow bridge which looked like swiss cheese, we noticed the boot pack got really wide, and people were taking a bunch a different paths across it, it turns out that folks from earlier in the day were punching through with their boots. I didn't realize any of this until i skied directly over a size 10 boot hole approximately 100' deep, and since i was leading, Don followed!

Within an hour we were back at the tree line at the top of the Scott Paul trail. We strapped skis to the packs, and decided to walk down the trail in our ski boots, it turned out to be an okay decision since there was so much spotty snow and running water on the trail. About an hour later we arrived at the adventure van back in the parking lot. It was now 4:30pm (exactly 12.5hrs car-to-car) and it was time to sit down and enjoy some lunch.

I'm not sure which happened first, but we'll just say these three things happened. 1. Don's eye started feeling better 2. We enjoyed ice cold beers inside the van 3. It started to rain outside. 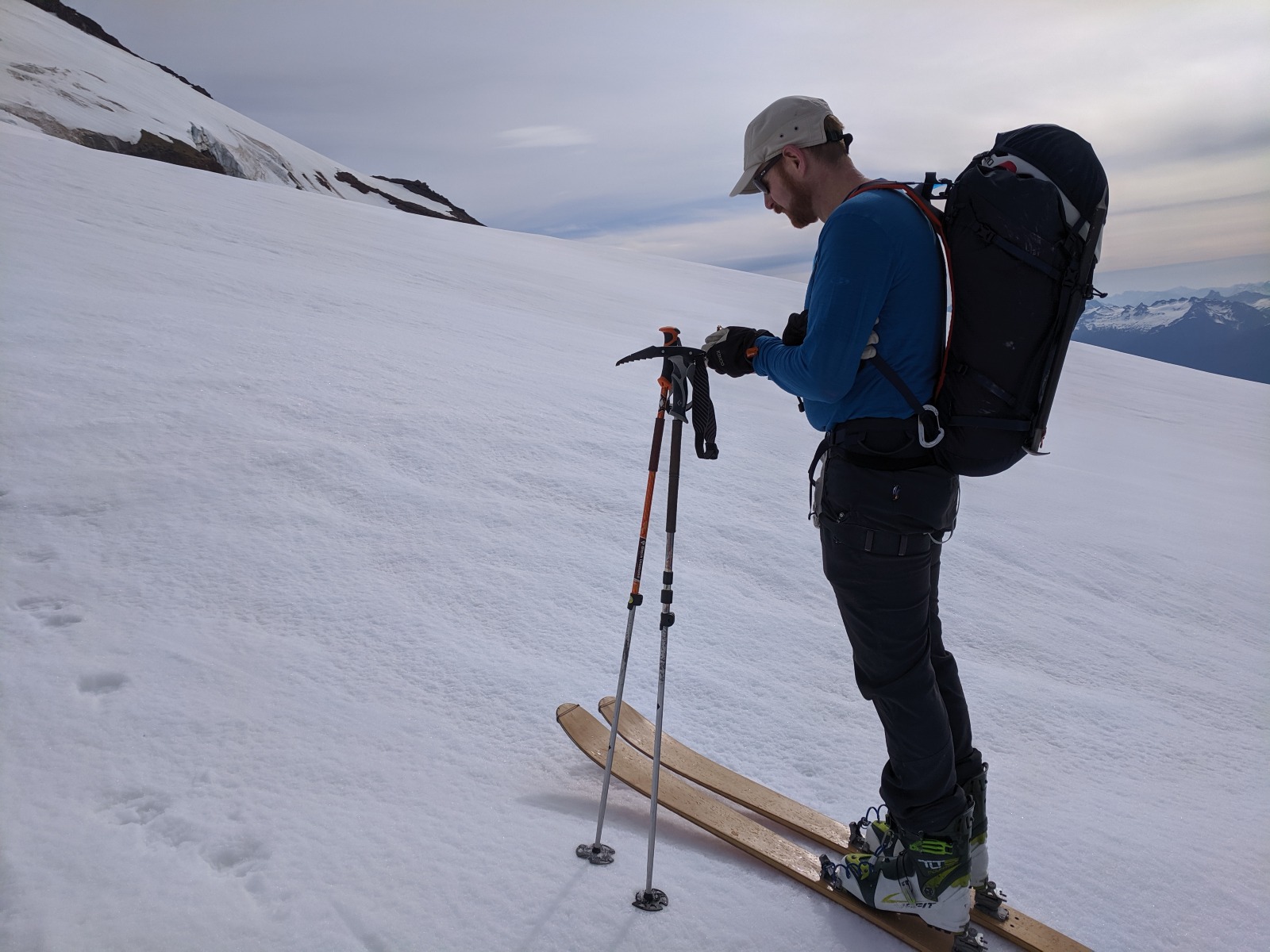 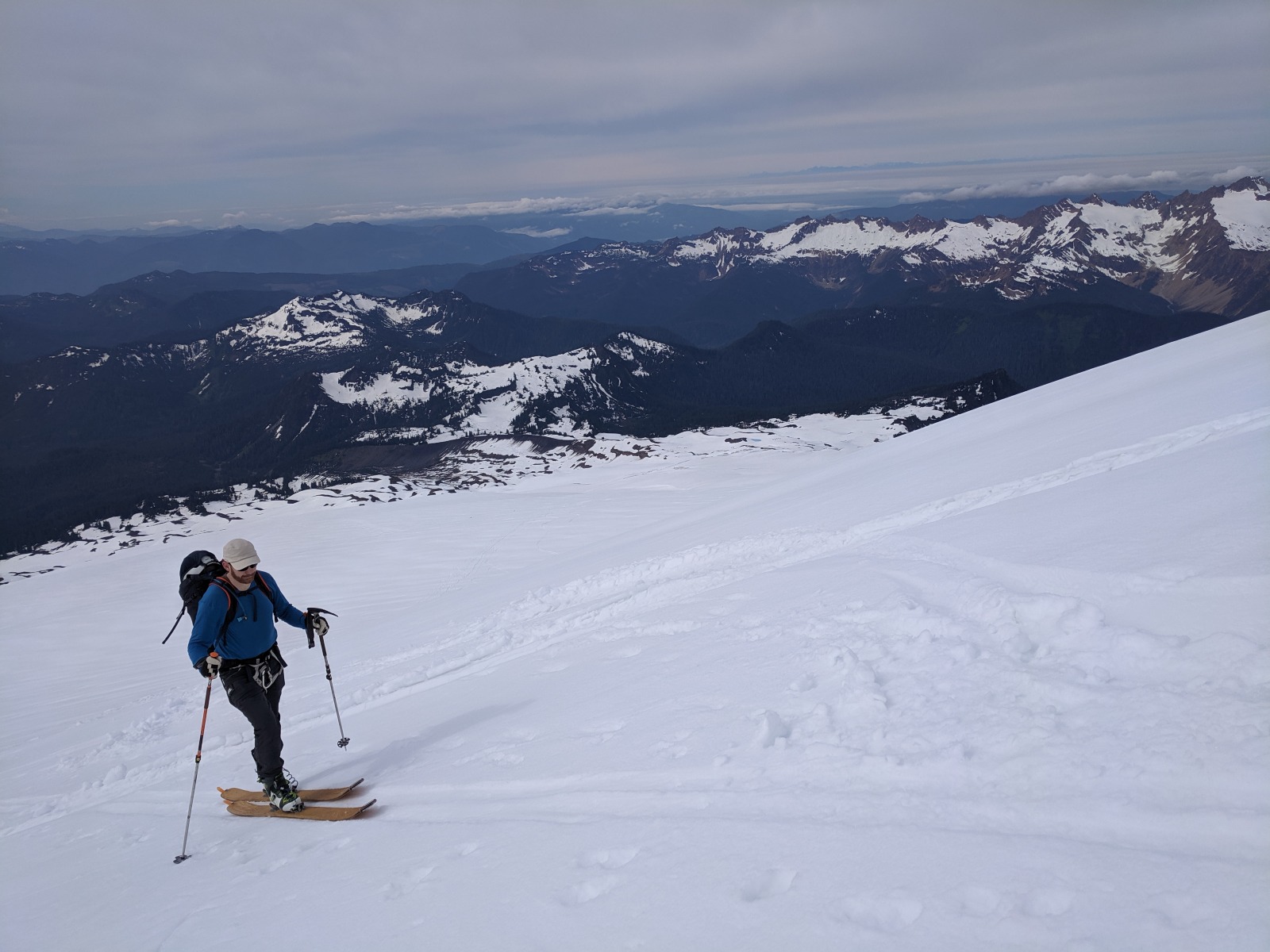 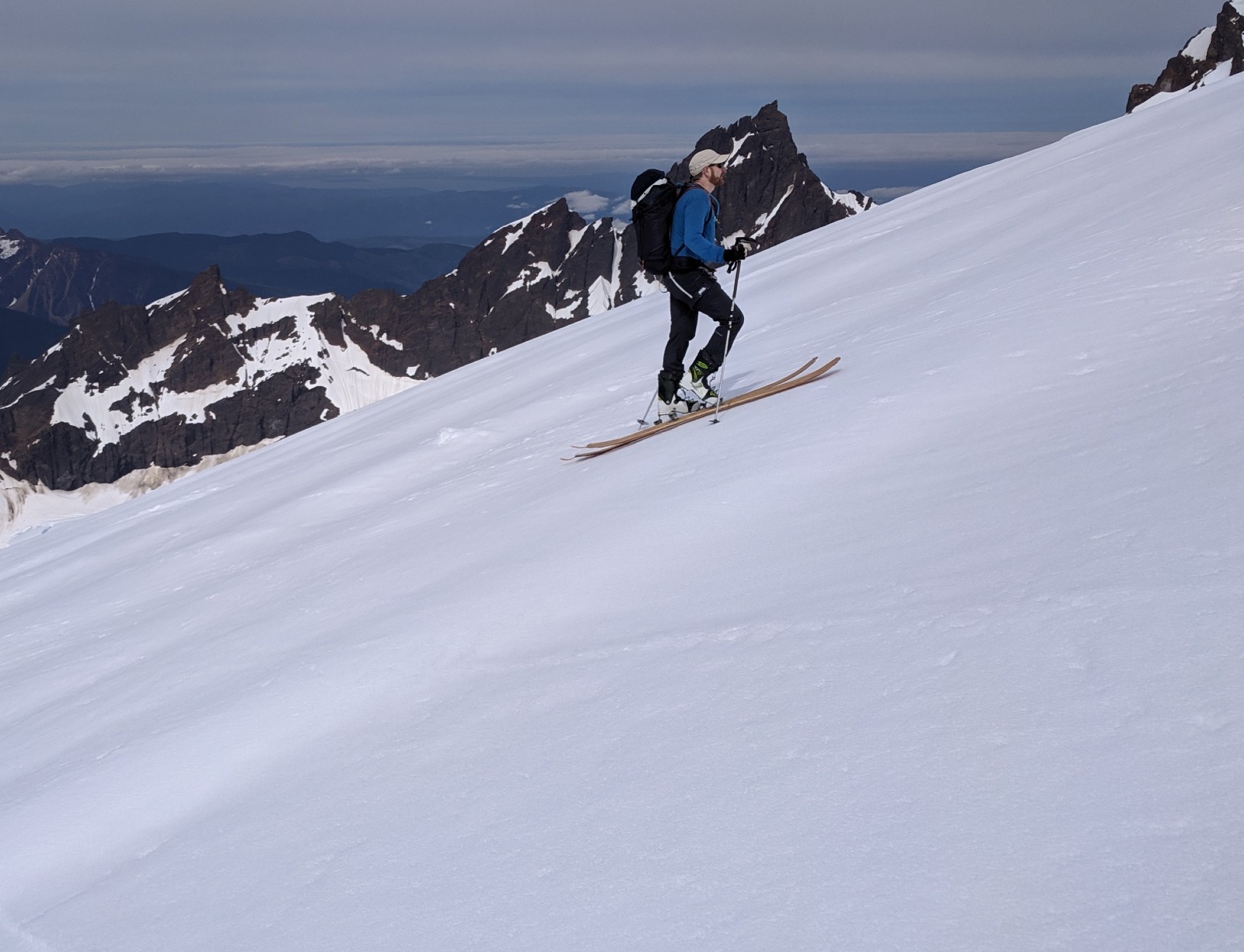 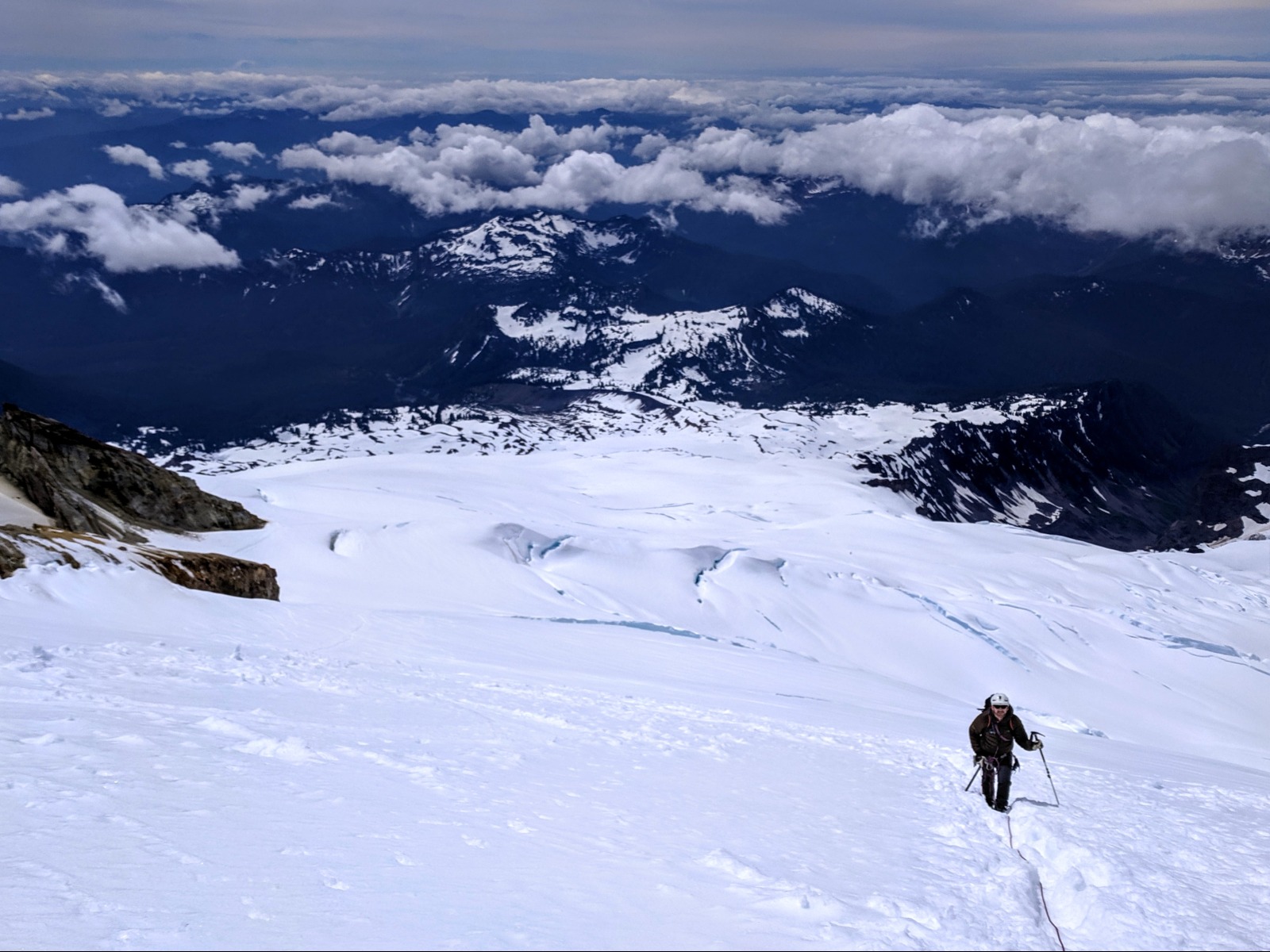 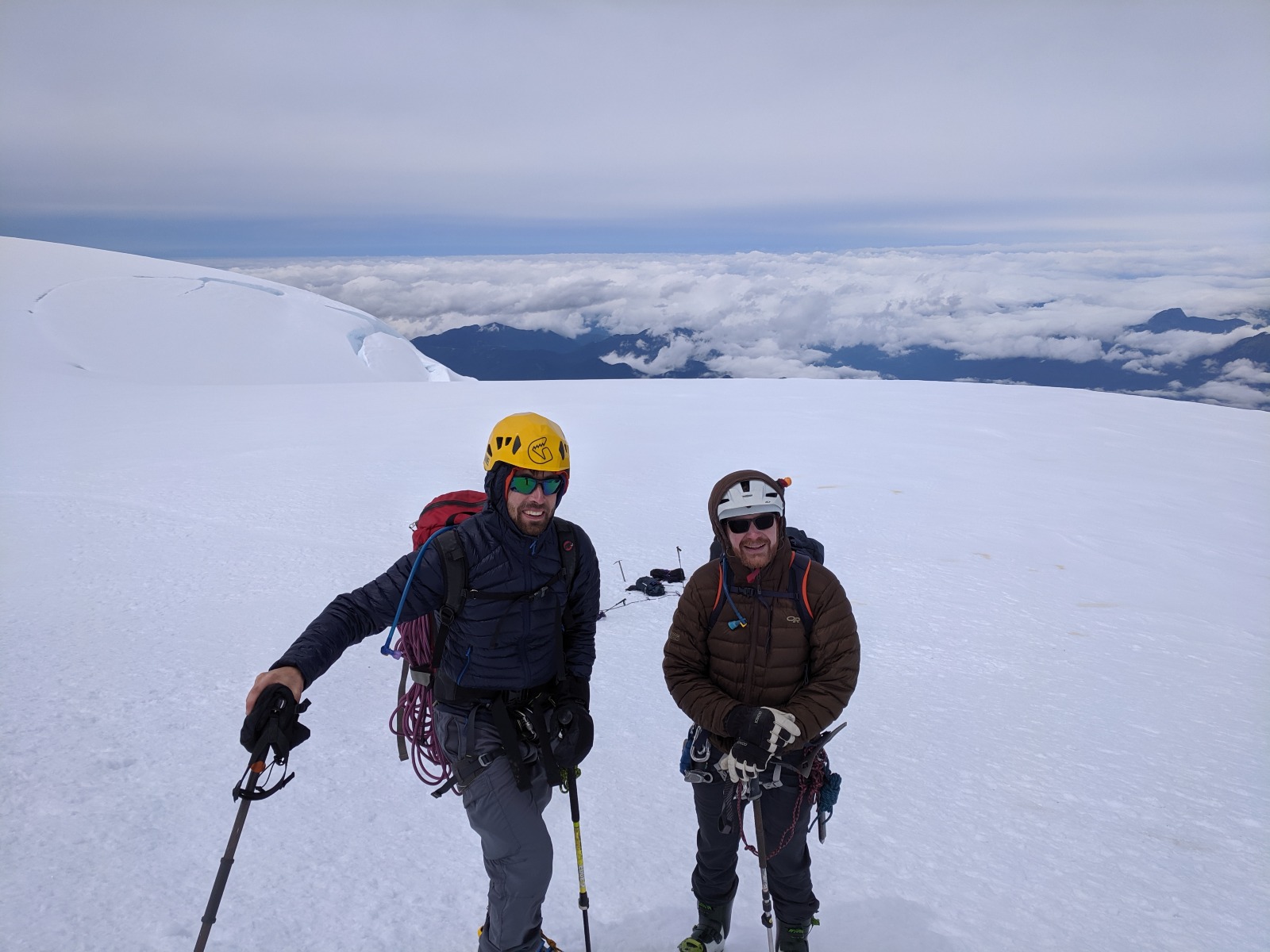